One day while browsing Craigslist I saw an ad for a free 1979 300SD W116 chassis turbo diesel sedan. The car had already been parted out and in the pictures it could clearly be seen that the front end of the car was missing. The ad said that it was a daily driver but started losing power and smoking badly. I contacted the owner about the car and he said that it was still running and would make the trip from Lynnwood to Tacoma since it still had half a tank of diesel fuel.

My first Mercedes Benz was a 1980 300SD W116 that I bought for $400 and drove until the non functioning climate control and windows got the best of me and I sold it on eBay for $600. I remember the outstanding fuel mileage, the solid handling, the style, and the purring of the diesel engine at idle. It was then that I realized how much I missed that car and wanted to take a chance at having another like it. I called the owner and told him that I would be there to pick it up the next day. 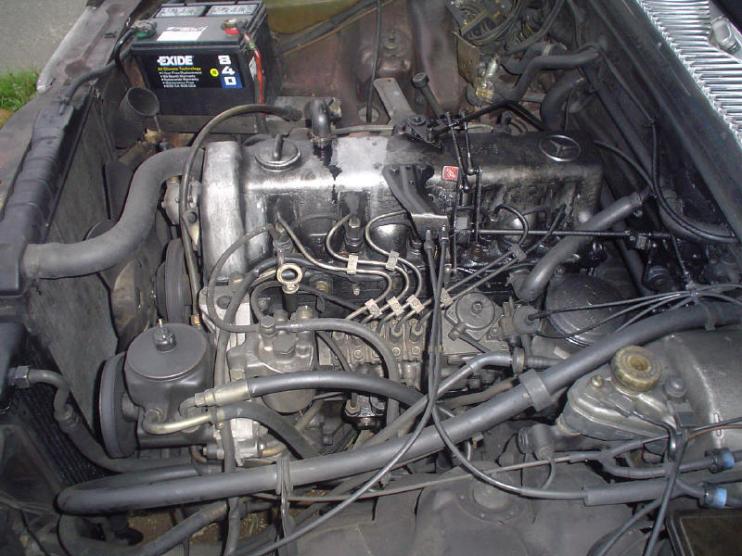 The next morning I drove my 1965 International Travel all with a tow dolly behind it to pick up the car. When I saw it the memories of my 1980 300SD (as brief as they were) started to come back. I saw past the water and leaves in the floorboards, the broken down seats, and the dirt on the exterior. I wondered how a car that was once so expensive could have been so neglected.

Taking a look at the front end I noticed that the wiring harness was cut when the headlights were removed. There was no front bumper, grille, or even hood latch. The fuse box also had no fuses in it, but I found some that had fallen out and inserted as many as I could find. I brought a battery and asked the owner to start the car. He came over with a can of ether, sprayed it into the turbo, and started it up. It was then that I noticed there was no air cleaner or alternator, and that the entire exhaust system was missing. Did that discourage me? No!

It was at about this time that I was glad I didn’t take the owner’s word that it would make the hour drive home. I disconnected the propeller shaft for towing and drove the car onto the tow dolly. I tied the hood of the car down since there was no latch. The owner gave me a release of interest form and I gave him my address to have the title sent to.

I towed the 300SD home and wondered if I would be able to get this free Mercedes not only running well, but also looking nice. One of the first things I did was put a plastic bag over the open window in the back and dried out the interior. For the next few months the local wrecking yards became my new hideouts as they would occasionally receive W116 chassis cars and the parts were affordable. I was still in need of diesel specific parts like an entire exhaust system and air cleaner assembly. I found a fellow W116 300SD owner only a few blocks away who had a 1979 parts car who was willing to give me the exhaust system and air cleaner in exchange for yard work. What a deal!

After doing extensive research on this car I read that ether should not be used. With winter on the way I was not able to get the engine to start without it. I still wasn’t discouraged. I realized this car was in need of maintenance before I could expect to drive it. I had wanted an alternative fuel vehicle for years and then was a good time to replace the leaking fuel hoses with biodiesel friendly hose. I ordered Parker marine hose from Mercedessource (and so convenient since I live in the same state and my order usually arrives the next day) along with the quality stainless German hose clamps. I used their viton hose for the fuel injector return lines. I read one of the Mercedessource repair books that shows what things need to be done to get a sick diesel running well again, and to get some ideas on why the car was so hard to start. From there I learned to adjust the valves and I replaced the valve cover gasket. I also replaced the fuel filters and then did an oil and filter change.

The car would still crank, crank, crank, but not start. I removed and tested the glow plugs, which were working. I then started tracing the glow plug module wires and saw that the ground wire had been cut when the headlights were removed. After repairing the wire I went inside the car, turned the key, waited for the glow plug light to go out, and then engaged the starter. The engine started popping and in a few seconds it was idling on its own!

By this time I was antsy to get the title so I phoned the person who gave me the car asking if he had sent in the paperwork so I could get a title and drive the car. He must have been in a bad mood because he started yelling at me, “DRIVE the car? You were supposed to give me your address and take care of that! I’ve been waiting on you and you’re going to get me in trouble for driving that car around on my registration!” I said, “I’m sorry. I have not been driving the car yet.” and then hung up. He called me back in a few minutes and apologized. He said, “Oh, I’ve had your address this whole time. I guess I should have mailed that information in. I’ll mail it today.”

A few weeks later the title was in my name and I spliced in a new headlight wiring harness to attach some headlights. I also ordered Mercedessource’s fuse kit upgrade, which was a big improvement over the corroded aluminum fuses that I got from the wrecking yards. I put insurance on the car and then proceeded to take the car on its maiden voyage to do an “Italian tune-up” that is, take it out on the freeway and drive it hard to burn the carbon out of the engine. When I got onto the freeway the car was leaving a trail of black smoke behind it. After a couple of miles the smoke stopped and I could feel the engine had a lot of pick-up. Hearing the whistle of the turbo was great. 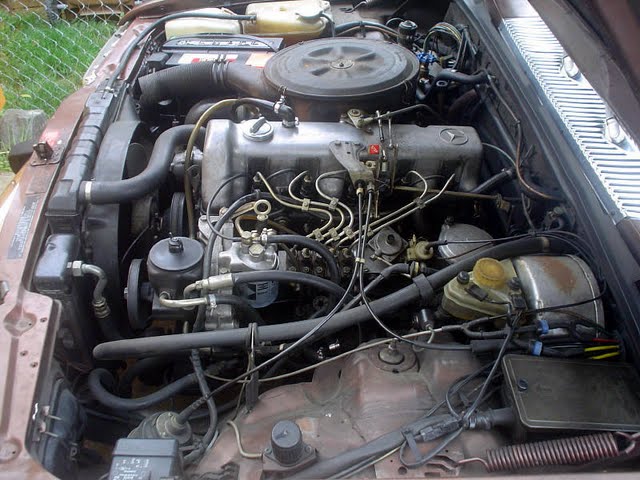 The 300SD became my new daily driver. I started filling up with B99 biodiesel which smells like play-dough and like a stir fry when coming out of the exhaust. I didn’t notice any lack of power when switching over from petroleum diesel. In fact, the engine seemed to run a bit smoother. By this time I had replaced all of the missing parts with parts from the less fortunate W116 sedans that ended up in the wrecking yards. My next task was rebuilding the back seat that had deteriorated padding and rusty springs. My car was made with headrests in the back seat and I was fortunate enough to find a Euro model W116 that had a rear seat that was in perfect condition with headrest brackets. I transplanted my seat skins on these and installed a rug material in between the springs and padding to prevent the springs from breaking the padding down. Having no radio in the car was getting to me so I installed a new Blaupunkt Bahamas CD deck, which besides being an OEM brand, looks like it was made for the car. When installing a modern head unit the factory fader wheel needs to be bypassed.

I found a set of European headlights at the wrecking yard and took them apart to clean them and paint the frames to protect them from corrosion. They made a big difference in the appearance of the car and the ability to see clearly at night. I got tired of the constant power window maintenance so I ordered a set of 4 manual window regulators from Germany and installed manual windows. You can’t roll down all 4 windows from the driver’s seat, but they are 100% reliable and low maintenance. The car had a sunroof that would only open in warm weather. Like the windows, I had planned on converting the sunroof from power to manual. The exterior color is Milan brown and the interior color is saffron. I had a custom dashboard cover made to protect the dashboard from cracking. 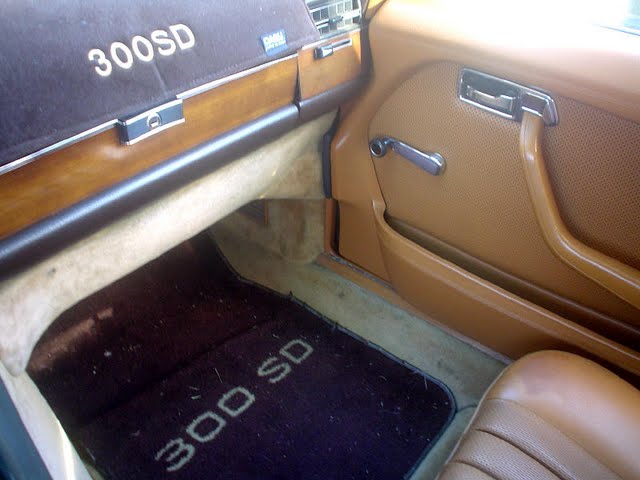 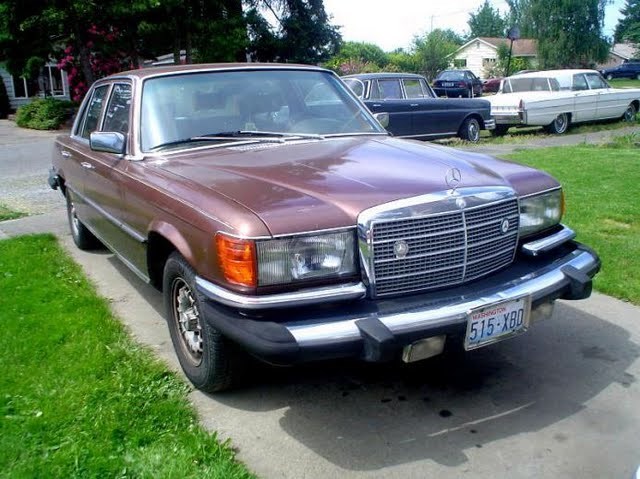 This car was by far the most reliable and best driving car that I had ever owned. I loved to see the look on people’s faces when I told them I got it for free. I think I paid for it with all of my labor, but I only had a few hundred dollars of used and new parts into it. At a difficult point in my life I sold it and now I wish I hadn’t. In fact, I am currently on the lookout for another W116 300SD, in a similar brown color. 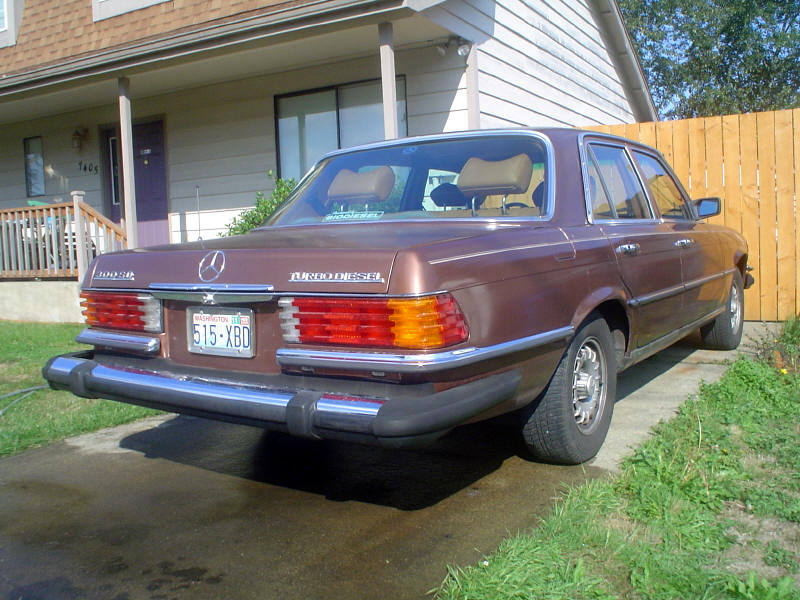 I currently drive a 1968 200D W110. It needed similar work, but not to the degree of the 300SD. Once I started driving Mercedes diesels I haven’t been able to go back to any other type of car! I truly feel they are some of the best cars ever made. Thanks to Mercedessource for helping us keep these cars on the road!