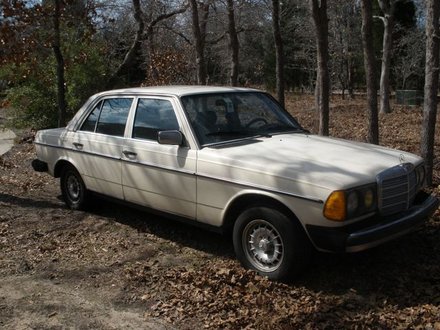 Hello my name is Joseph and I am a Mercedes 123aholic!  It has been two weeks since I last worked on one of these fine machines.  I was first introduced to the magnificence of the Mercedes 123 at the ripe young age of 0.  My parents bought a 1979 240D when I was about a month old, and I have been in love ever since.  As far as enjoying working on them, I found that out at about age 8 when our main glow plug fuse (the one on the firewall) failed and my mom couldn’t get the engine warm enough to turn over unless she tried to start it about 50 times.  She called her local Mercedes mechanic and he was walking her through replacing the burnt out fuse with a piece of coat hanger cut and bent to fit as a temporary replacement.  My mom did well at this part but forgot to re hook up the wires on either side of the glow plug and couldn’t understand why it still wouldn’t start.  I went and looked at it for a while and ascertained the problem and hooked the two wires back up and told my mom.  Then all of a sudden the car started like a champ.  From this point on I was hooked.  So you can understand why when my mom was considering selling the vehicle I immediately said that I wanted it.  I didn’t have much money at the time so I convinced my dad to buy it from my mom for me (my parents had been divorced for more then 10 years by then).  In fact my dad loved the car too, so much so that he bought it twice!

Initially when I got it everything worked and so there wasn’t much to fix.  Then one day the manual window stopped cranking up and down so I took off the door panel to see what was happening and ended up changing out the window regulator.  Again there wasn’t much wrong with the car and so there wasn’t much to do until it started to leak water into the passenger floor panel.  I lamented the idea of the expense of changing or repairing the floor panel when I found your rust repair kit on the internet and I ordered it.  I put the old 240 up on blocks and took out the battery and battery tray and sanded down the area underneath to expose the problem.   After much labor fixing the rust hole in the firewall, I went to work on the floorboard and fixed that too.  I then replaced the battery tray that had been degraded due to 20 years of battery acid.  It was a lot of work but I loved it.

At this point I was so consumed by my addiction that I did what all other addicts do, I wanted more so I got more.  My Granddad was in need of finding an inexpensive but reliable car.  With some finagling I convinced him to buy a 1983 300D Turbo that seemed to be in pretty good condition and told him I would do the work on it.  He bought it for $1200 from a used car lot that had bought it from a guy who had had it in his barn for awhile.  With the change of a window relay the electric windows worked, Yeah!  Then the starter quit and I replaced that.  Next I replaced the master cylinder (again with the parts and directions supplied by Mercedessource).  I had it running like a top and shortly thereafter my Granddad stopped driving.  Because he could see how much I loved these old cars he gave it to me. After awhile I decided that I wasn’t satisfied with the status quo and so I set about fixing and replacing many things to get the vehicle back up to new, including: replacing all the seals on the sunroof, replacing the seals around the door windows, redoing all the brakes with new rotors, pads, and two new calipers, changing the transmission cooler lines (great upgrade), changing motor mounts and oil cooler lines, replacing the oil filter housing gasket, rebuilding the vacuum pump, and replacing the water pump (all of this by the way with Mercedessource parts and instructions).  There is still more to go, including a valve adjustment, front main seal replacement, timing chain replacement, and rear axle replacement.

So as you can see I am truly an addict as I have not one but two of these wonderful machines and I can’t justify getting rid of either, but with help from your instruction manuals and with the parts I continue to buy from Mercedessource, these two vehicles will continue along for many years.