Overhauling the OM 602 and 603 Turbo Chargers

Over the past 5 years we have had increasing requests to provide kits to overhaul the turbo chargers on 1986 to 1993 turbo diesels. Our OM 617 turbo charger repair kit for the 1978 to 1985 turbo diesels has been extremely popular. Parts for the later models are more difficult to find due to the limited production of those diesels. The challenge for us has not been the problem of finding parts but of finding them at a price that makes the complete overhaul affordable for the D.I.Y. mechanic. To add to this there are two types of turbochargers.  The Garrett ( U.S. manufacturer) and the KKK ( German manufacturer ). KKK parts are much more difficult to obtain. Due to lack of parts availability and low demand we do not support KKK turbos for any year or model.

Our first attempt at creating a kit for the OM 60x turbo charger started with the 1986 and 1987 300D, 300TD and 300SDL. The turbo charger assembly is much more difficult to remove than on the earlier engines. There are more bolts and fasteners to get off and access is more limited. What Kent found interesting when he opened up the turbo was that the insides (on the Garrett turbos) are virtually the same as on the OM 617. Only the turbine shaft and wheel is different. But the 603 KKK turbo proved to be near impossible to get affordable parts for.

We do have a repair kit for the Garrett turbo charger for the 1986 and 1987 6 cylinder diesels. We can also supply a new turbine wheel and compressor wheel for those turbos as well. We do not have any parts or kits for the late 603 engine nor for the 602 engine in the 300D 2.5. There is just not enough demand to offset the development costs. 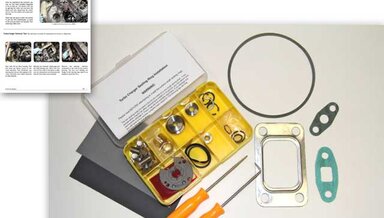 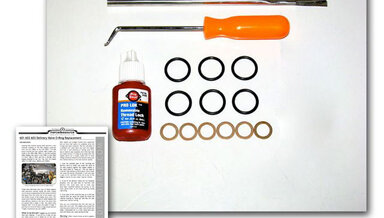 A special 32 pt. Socket is REQUIRED but is NOT included - see description and related products below if you do not already own this tool.