The right tool will make the job easy on most models from the late 1960's right up into the early 2000's On almost all models except the W201 190E 2.6 you can just reach up inside the tunnel and remove and press in the new bushing with Kent's special tool that we make here in our shop. Without this special tool it is almost impossible. Since these bushings were used from the mid 1960's right up into the early 2000's many are getting so long that they are failing and will need replacing.

LIMITED WORK SPACE ALERT: You will have a real challenge on SOME models since there is so little room to work up alongside the transmission tunnel when replacing the forward bushing. The rear of the transmission will have to be dropped down in order to replace the bushing on the transmission shift arm. This is particularly true with the 190E 2.6 models.  On some 190E 2.3 or 190D diesels there may or may not be enough room. On some other models you may or may not want to consider this extra step. If you have room to get the tool up along side the tunnel and can manipulate the tool then you will not need to lower the back of the transmission. Here are some tips on how to do this: 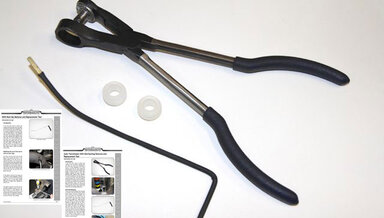 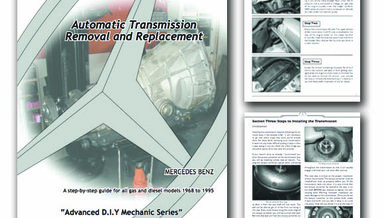 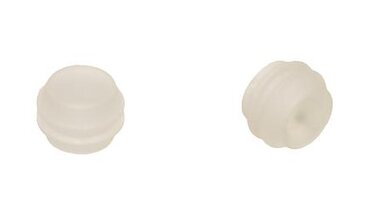