As mentioned in my previous report on my 6.9 project, my first test drive proved to be less than an enjoyable ride.  The car rode very stiff at all speeds. If you have ever ridden in a wooden wagon with solid wheels you can get the picture. Along with the rough ride all four high pressure hoses to the hydraulic struts showed signs of leaking - actually leaking from the inside out. This is a common problem with this type of 20 plus year old hose. On any hydraulic SLS Mercedes ( includes 6.9, 300TD wagon, 190E 16V, 300TE, 560SEL and other grey market models) blackened hydraulic fluid is a sure sign that the inside of the hoses on the suspension system are rotting internally. Let me tell you, the old hydraulic fluid in my 6.9 was not a pretty sight. 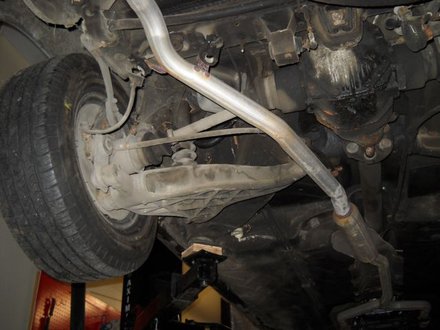 I knew I had my work cut out for me. There is an old joke floating around concerning the 6.9. It goes something like this - "If you ever have to take your car into the dealer with a failed suspension system be prepared to take out a second mortgage on your house!" Might be overstated, but image how much all this work I am doing on my 6.9 would cost if I took it into a shop and told them to fix it!  As of now that only includes the complete fuel system, complete brake component replacement, and now the repair of the hydraulic system.  If not a second mortgage at least I would have to sell a couple of my other cars. The system is complex but it is not rocket science. Do the work yourself and save big $$$$! 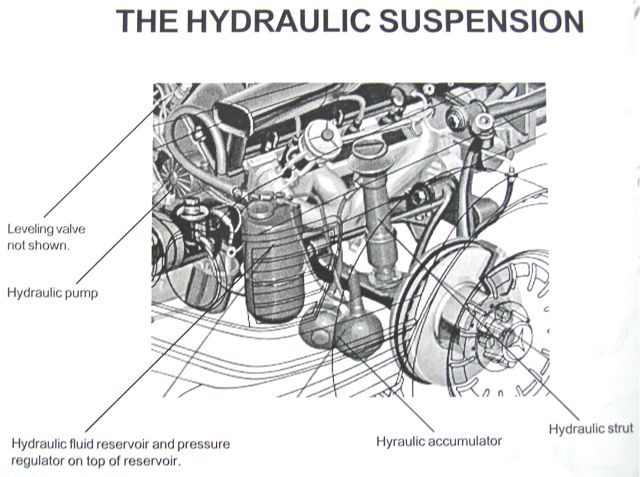 On the positive side there were no signs of hydraulic strut or leveling valve leaks, and the car would pump up and sit level and no drop back down at all after sitting for days. Hopefully the struts and two leveling valve would prove to be ok and I would only have to replace the accumulators and the hydraulic hoses and fluid.

The accumulators on the car looked old and neglected  Three are located on the front. One under the battery and two under the front of the left front fender as shown below. Those engineers sure found some interesting places to mount them! 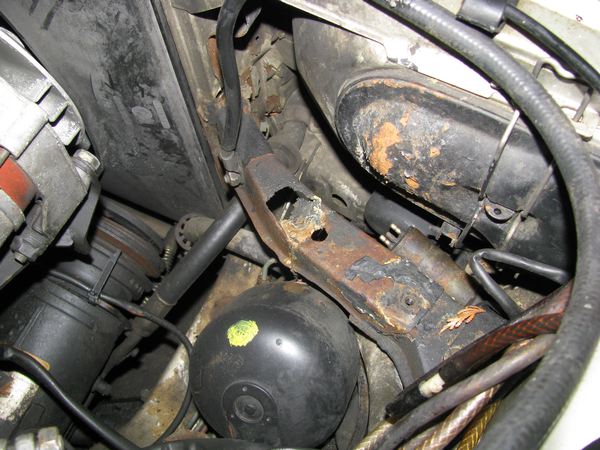 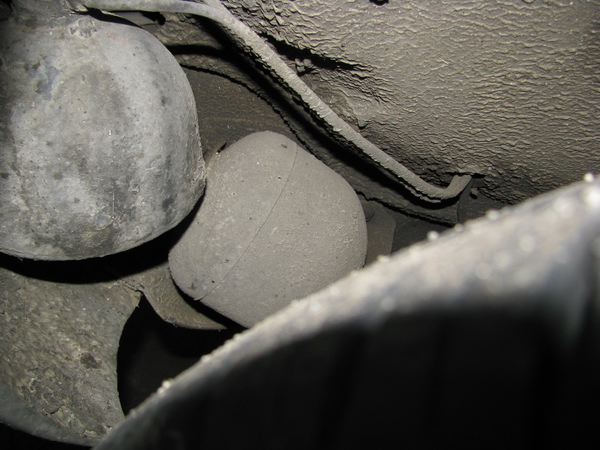 Right off the bat I knew I was going to have to order 5 accumulator balls. That is right there are five of them on the 6.9 and prices range for $150 to $175 each!  I quickly started spreading the word to my family that I knew what I wanted for Christmas... :-). Inside each accumulator is a rubber diaphragm. One side of the sphere is filled with nitrogen gas and the other side is filled with hydraulic fluid coming out the top of one of the struts. Hydraulic fluid can not compress but nitrogen gas can. In this system, when the car goes over a bump the strut is allowed to move fluid up into the accumulator and "bend" the diaphragm toward the gas filled side. These accumulators are good for approximately 10 to 12 years after which the diaphragms will rupture, the gas will escape, and the sphere will become completely full of hydraulic fluid. At that point there is no longer any shock absorbing capability and the suspension will feel like a buckboard. I was pretty confident that I had to start out with all new accumulators. Since no one gave them to me for Christmas I just had to bite the bullet and get them ordered. Even for me it was painful, but with a proven good engine and transmission I was committed to see this project through.  In a few days the 5 accumulators arrived ( by the way the 5th accumulator serves as a main system buffer to all the others. 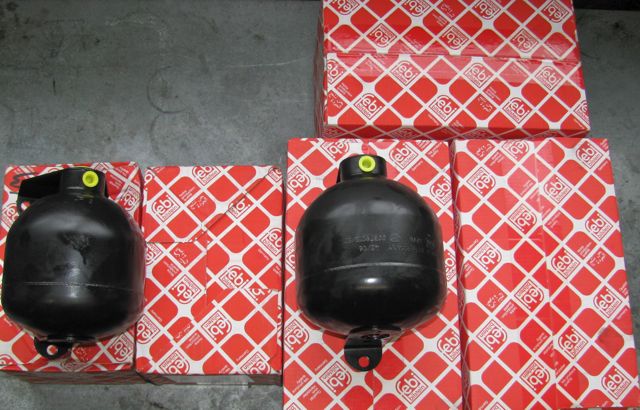 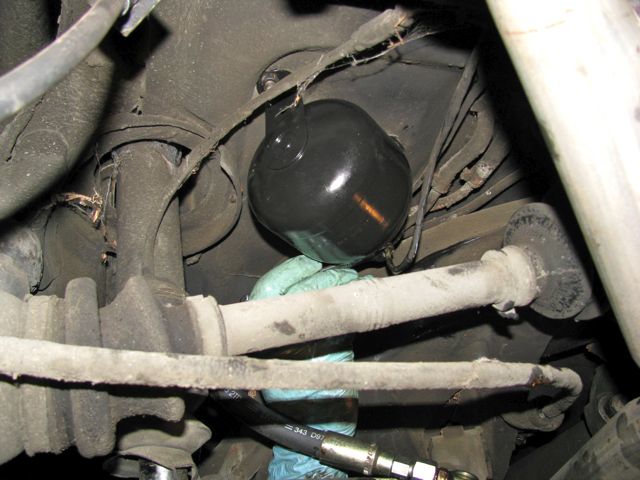 The rear accumulators were easy to replace (one above each axle). The front were a little more difficult, especially the one located under the battery tray. Some of the hard line fittings were very hard to get to. It was amazing to see where the engineers found places to mount these spheres. Remember, the 116 chassis was never originally designed for this type suspension. This will an "afterthought" when the engineers at the factory decided it would be fun to build a Mercedes muscle car. 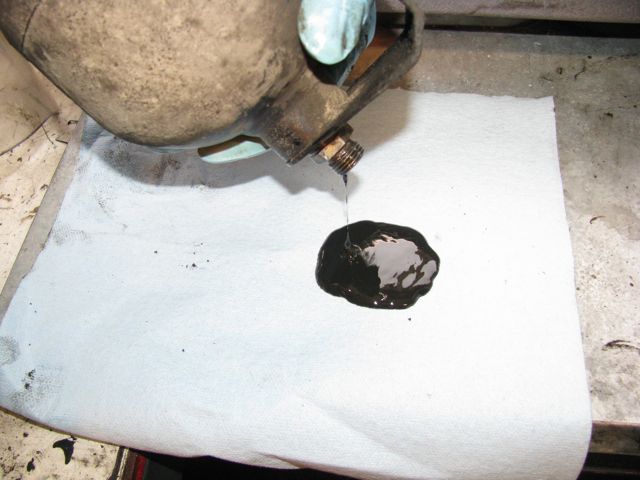 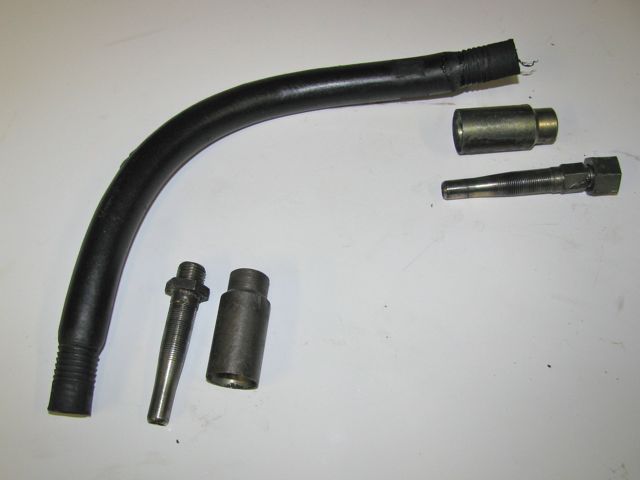 Just look what I found inside the old accumulators! Wow, that sure is some pretty stuff. No wonder the car rode like a sled. When I got the hoses off and inspected them they did not look much better. The hose pictured above right had actual bubbles showing on the outside. I was not able to locate new hoses through our normal suppliers, so I decided to do some research and fabricate my own. The end fittings unscrew just like a lot of other high pressure hydraulic hoses. The trick was to find just the right specification and size hose that could do the job. I discovered that the 6.9 uses exactly the same diameter size hose and similar fittings to what are used on the 123 chassis 300TD wagon. For some time, I have been working on a high pressure hydraulic hose repair kit for those cars and already had tested a number of different types of U.S. Parker made hose. So I was able to fabricate four new hoses on my own. NOTE: In the near future I will be offering high pressure hose replacement kits for all the SLS cars Mercedes made up through early 1990s. 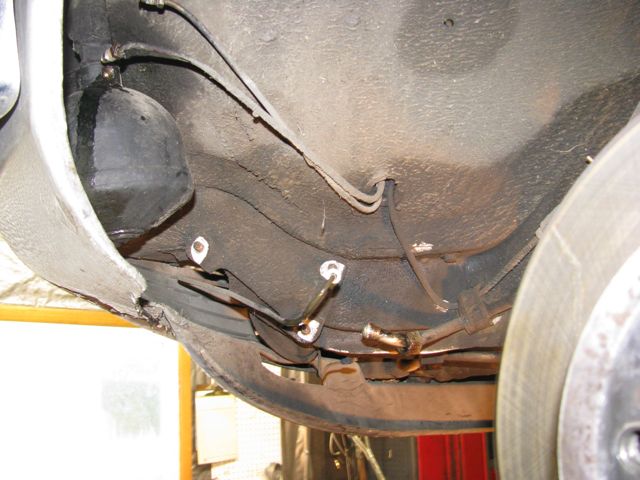 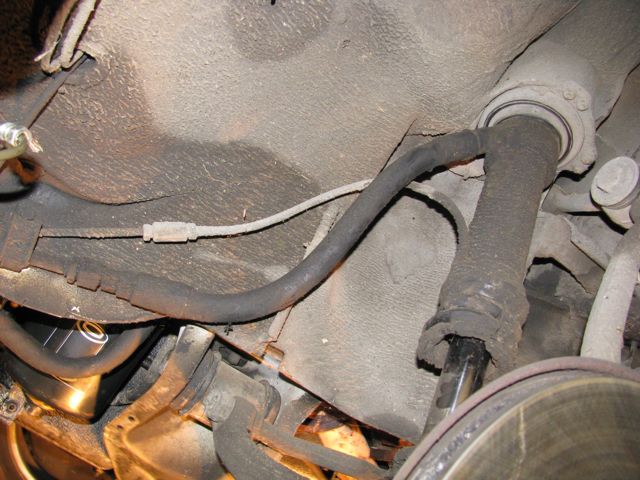 Care to be taken when remove the fittings form the old accumulators and installed the threaded ends back into the new units. No room for error here. Damaged threads would create some real headaches. Note the wetness around the hose and on the inner fender panel. This is a sure sign the hose has been slowing weeping fluid over a long period of time. 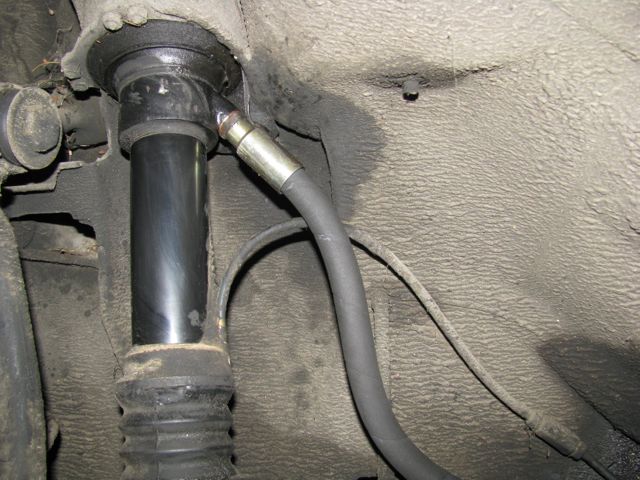 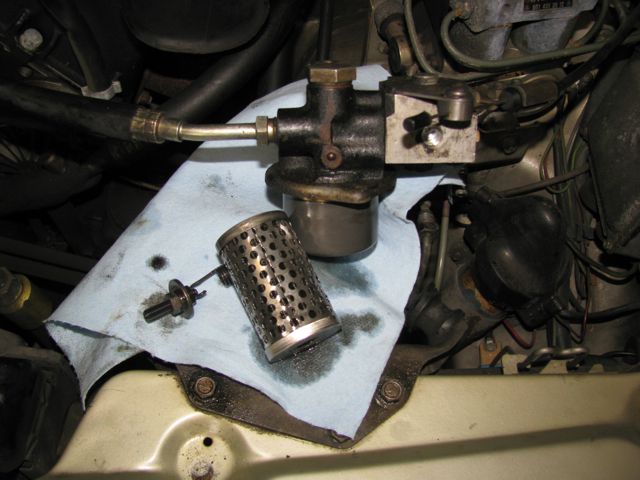 I replaced all 5 accumulators, rebuilt the four high pressure strut hoses, changed filter and fluid, lowered the car back on the ground and started it up.  I ran it at about 2000 rpm to self bleed the system an with 2 minutes it was starting to raise up. Now I was exciting! As I started to back the car out of the shop I knew I could feel the difference in the suspension. When I went know the driveway I could feel the cushioning affect of the new accumulators. When I hit the road and punched it I knew I had a winner! SUCCESS... the car rode like a dream. If you have never had the chance to ride in a 6.9 you are missing something. After a 10 minute shakedown I pulled back into the parking lot to check ride height and look for leaks.

All I can say is this car is now sitting pretty.  Now it is time to tackle the exhuast system. Can you believe some muffler shop welded in a 2 inch single pipe exhaust. There is so much back pressure that the rear muffler gets almost too hot to touch. This problem has got to be fixed before I start driving the car on a regular basis. TO BE CONTINUED... 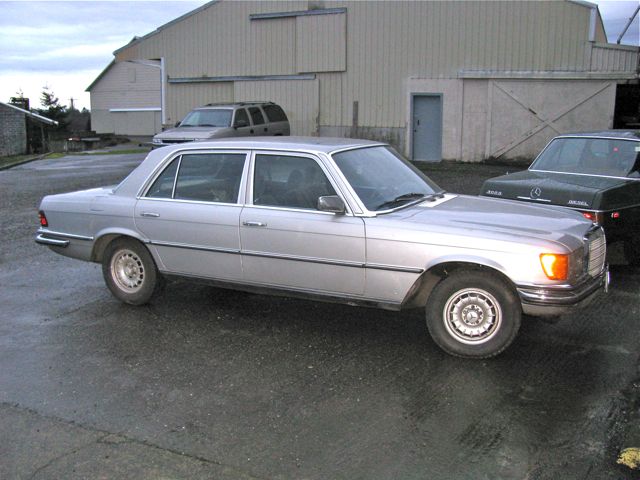 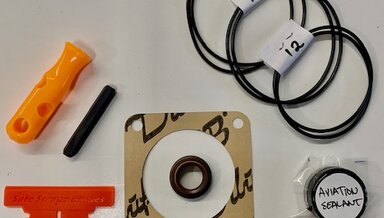 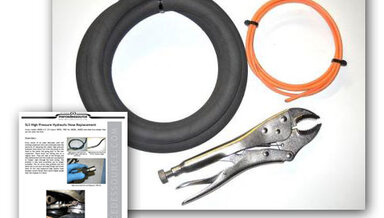 Specific for the W123 300TD Wagon. May work for hose replacement on other models. Please read details below. 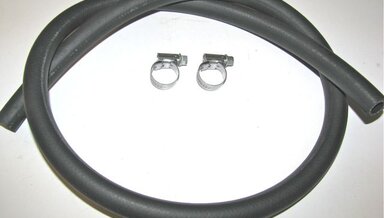 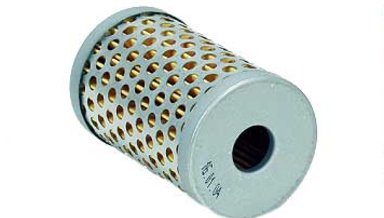